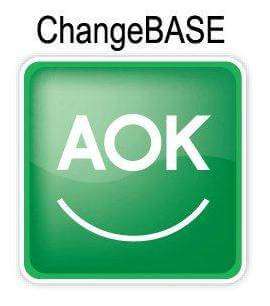 As ever thanks for reading my blog. So today I’m going to do a little review of AOK Changebase 4.1, note that I say it’s AOK Changebase but the company has recently been bought by Quest Software and will be going through rebranding for the next version of the software. I meant to blog about this tool months ago, shortly after my AppTitude review but other things got in the way. For this blog post I’m going to try and avoid comparing the tool to App-DNA AppTitude and will instead do another blog where I go through some of the differences. I should say, that each tool has it’s nice different features so they are both pretty great. But anyways here we go. (Apologies for some of the images being incorrectly aligned. WordPress is acting up on me.

Firstly the licensing of this application is currently based per application imported. I’m not trying to sell the tool so won’t go into pricing, for that I suggest you try the ChangeBase website. Once you have purchased your licenses you should be ready to setup the tool. The Setup is actually pretty straight forward, Simple in fact if you are just doing a POC on a laptop, that way you could just use SQL Express 2008, just keep in mind that the Database would have a size limitation of 4GB and the Changebase recommendation is that 400 application imports would amount to about 5GB. You may instead want to set the tool up as a Server Client setup. In which case you could have an SQL server running full SQL 2008 and ChangeBase on your workstations as the Client Tool. With a Working Directory setup on a share and the users having a valid license file within their %localappdata% folder. I won’t harp on about the setup because I’d like to focus more on the tool itself.

Firstly you can see the Database I had setup for my testing in tab form on the bottom. I highlight this because this is where you can make some configuration changes to your Database by right clicking and changing properties. You may want to change your Working Directory for example. Also why it is important. If you have multiple databases, say for multiple projects. And you have valid licenses for each in your %localappdata% folder you will have multiple tabs which you can toggle through.

The image above is a screenshot of my %localappdata% folder in which you can see my cbl file which is my changebase license file, if I had multiple license files I’d have different .cbl files. They need to be named differently as not to cause conflict.  Here you can also see the WorkBenchSettings.xml which is the tools configuration file which allows you to make some config changes through editing the text file but nearly all changes can be made through the UI. As stated you can make changes to your config settings through the UI. You can change your Working Directory and DB settings by by Right clicking your DB tab and go to properties. You also have other options from this tab such as create a new Database or Rename it. In my screenshots I had the DB setup on my workstation using SQL Express. If you had the DB setup on the server, it would be a good idea to have your working directory setup on a share on the server also. There’s other app settings which can be edited through the options menu which I’ll go through later. Under reports you can find the modules I have selected. These are basically the rule set that I wan to analyze my applications against. This will tell me if my application may have issues running on say a Windows 7 x64 platform, or virtualized or even on  a server etc. In my screenshot I have only selected a few. There are many more modules to select than this.

When the applications have been fully loaded into the tool you can now select the run it button which runs the actual checks against the different modules. If an application is found to have issues which require a fix it’s possible the tool can automatically create a fix for you. The tool does not use standard shims but rather a Changebase created solution which appears to be a manifest file. You can pick how the fix is applied e.g. straight into the MSI or into an MST file. As per the legend above you can see this application is currently locked to my user, Has possible fixes and is presenting with a warning. Also dependency loaded. There’s many different levels of reporting which can be outputted into MHT files or CSV. You can see the different options above. The RAG means Red Amber Green which is the means of reporting on the applications. Red meaning an issue is detected with no known fix, Amber means there’s been issues detected with possible fixes, Green means Changebase has not discovered any issues. You can find sample reports through AOK ChangeBases website. I won’t go into everything in the options screen but the report options just sets options for how you view the reports. Package Load Fixes is more important. If you are applying your fixes directly into the MSI you should really select to backup the MSI before applying the fix. It’s a good idea to load all non-core MSI tables incase there’s custom tables which have issues. Analyse Web Files should only be selected for Web Applications. When you select Web Files and are only reporting on Desktop applications the tool will take much, much longer to run as the tool will mistake it for a web app and timeout before trying to import as a desktop app.

Transforms is for when you are creating Transforms for your fixes. Roll up Fixes, rolls up fixes into a created transform. Supressing the Validation Errors takes care of the ICE validation on the created MST. Dependency Analysis takes care of what is analyzed for all dependency apps e.g. middleware The Upgrade tab contains the different rule sets for the modules you are licensed for. Any time you go into Upgrade the tool checks against the Changebase web server to check if the rules are up to date. This is also where you can select which modules to set in your workbench.

The Addin tab allows you to setup an Addin tool. For example you could make a MSI editing tool like instead into an Addin so when you right click an application you could have the option to open with instead just like you can see with Orca in the above screenshot.

Something that is unique to the Changebase tool is it’s ability to aide in the QA of your applications. The tool can analyze your MSIs and MSTs to check for the above ICE errors and those ICE errors only unfortunately. It can also automatically fix those  ICE errors. Not only can the tool help with QA of applications but it can also convert your non msi files by setting up a Virtual Machine in VMWare Server or Workstation and installing the Changebase Setup on your base machine and Virtual Machine. It’s a very simple setup, everything required is done through a setup wizard. The Tool will automically launch the VM and install say the .exe you pointed to and load in the MSI it creates. You then choose run it and the application is analyzed  against the rules you’ve selected.

There’s also a an option to automatically virtualize your applications. Instead of converting the apps to MSI, the tool will launch the APP-V Sequencer (version 4.6, not SP1) and run a sequence of the app. I won’t go into much detail because I’d like to go through the Virtualization module of AppTitude and ChangeBase together. One good thing about the module is it uses the actual Sequencer.

I’ll leave it there for now and will do a bit of a comparison between both later on. Thanks for reading. Let me conclude that this tool is quite good and is a good foe for AppTitude, the architecture is different and has some fringe benefits as the DB size stays quite small thanks to only importing meta date information from the MSIs and the tool can be used in a very open, flexible manner by dragging and dropping onto the work bench. There’s also a huge variety of reporting which is really good. Thanks for reading.