A few months ago at one of the first meetings of our Phoenix Citrix Users Group one of the guys in attendance brought up Workspot. I had never heard of Workspot but the way he described them, it sounded like something pretty different and cool. By chance, a few weeks ago, my colleagues at Algiz Technology setup a call with some of the guys at Workspot and got some demos lined up. We also got a limited trial to play with. This blog post is based on my experience with that limited trial.

So, what’s the deal with Workspot?

They claim it’s VDI (Virtual Desktop Infrastructure) 2.0. To describe it in my not so eloquent words, today your VDI is likely a bit of a mess. Many, many moving parts. You’ve got your storage, network, servers, running on top of that, you’ve got the virtual machines which need software to manage the desktops, something to provision desktops, applications etc.,  you also require brokers for managing the handoff, load balancing for ensuring the sessions are spread across your resources smoothly and a console or even many management consoles for an admin to interact with in order to provision\create desktops, assign desktops, assign applications, update etc. VDI has been the next big thing for many years but to this point it just hasn’t come to the forefront due to the cost and complexity. With Workspot, they provide a simple management pane running in the cloud which can be used to manage your VDI environment. Their cloud services also act as a broker service, load balancing service and a provisioning service. You effectively have a hybrid solution. Your VDI is running on prem but the front facing worker services run in the cloud. I’ll discuss some of the cool features of their management pane and the user experience a little bit further into this post but before that, I want to address their VDI 2.0. As you can see in the above image (which I took from their site) VDI 2.0 is even more simplified, further reducing those moving parts. That’s because the previously mentioned hybrid setup with a physical stack is condensed into a hyper-converged solution.

Imagine this, you get a few Nutanix or Atlantis boxes to run your desktops, they are awesome for VDI due to having built in de-duplication, they also have their own nice hypervisor now too. You can plugin a box and have thousands of VM’s up and running within hours. Just plugin in your network cable, built out your virtual desktops and then configure Workspot to point to your environment. You’ve simplified setup and you’ve now got a ‘set it and forget t’ infrastructure for running the virtual desktops. By using Workspot with your Nutanix, Atlantis or possibly VMware boxes, you are removing the need to setup and manage an infrastructure for hosting web services for management tools, you also remove the need to setup provisioning tools, load balancing products or brokering services. Workspot leverages RDP, there’s no extra infrastructure or protocols required. With a hyper-converged solution, scaling with Workspot is as simple as plugging in a new appliance.

The key is to simplify VDI and that’s exactly what they do. For more, check out their own information HERE 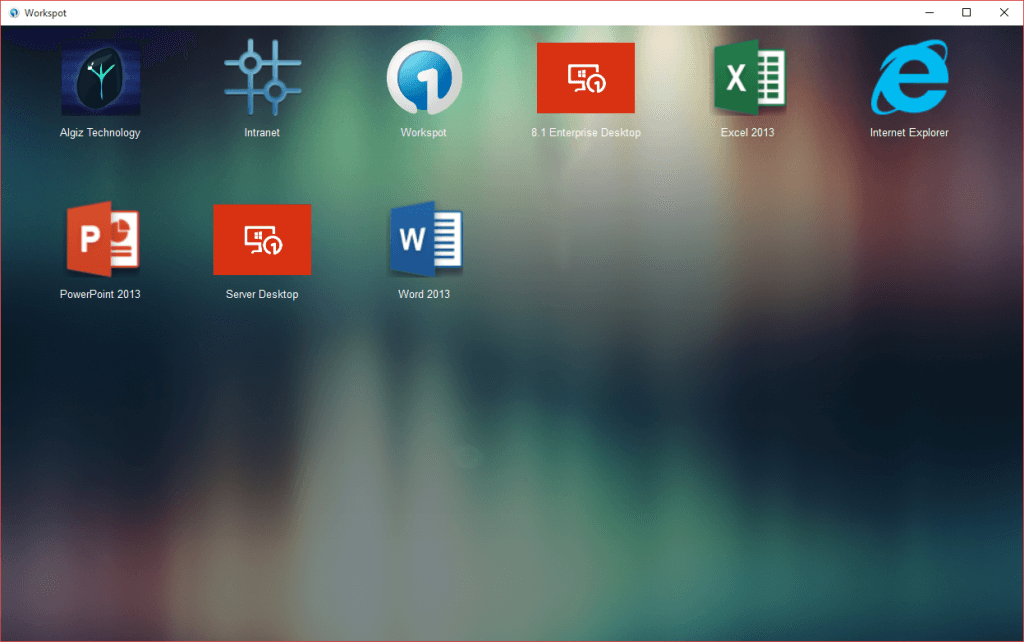 Running on a Windows 10 Desktop

The UI (User Interface) for users is pretty straight forward. In the above images, you can see we’ve got published applications and some published desktops. A desktop and server in this instance. This console appears the same on any device. Check out these screenshots from my Samsung Galaxy S4, Macbook Pro and iPhone: 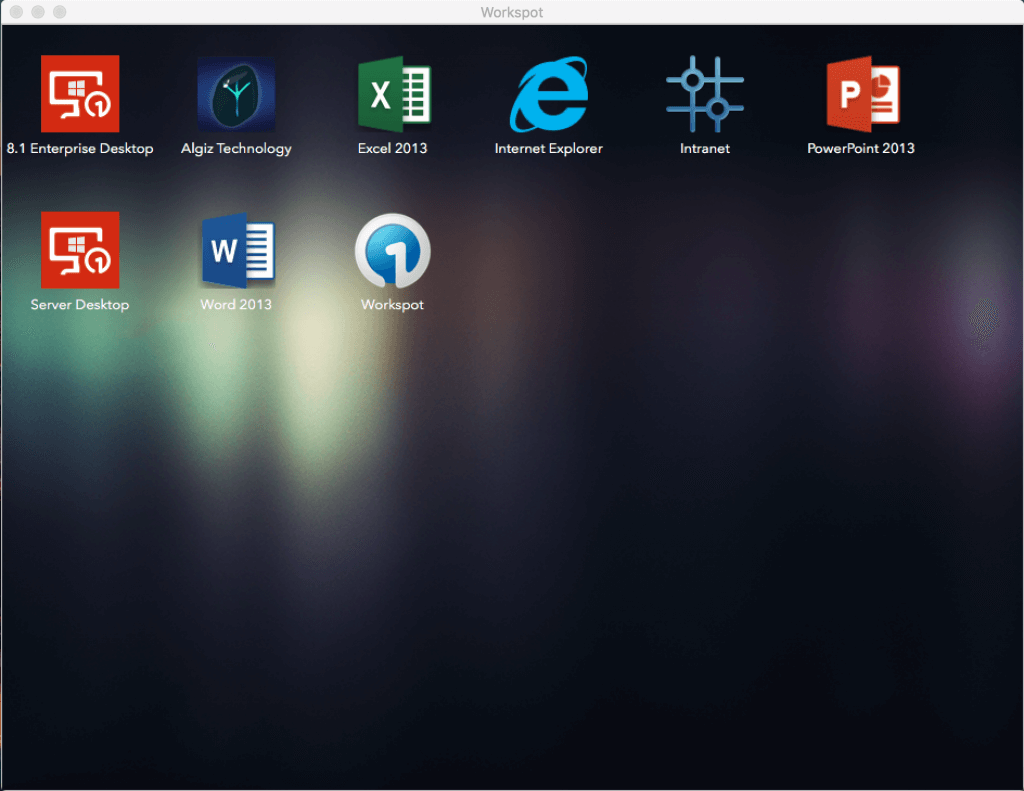 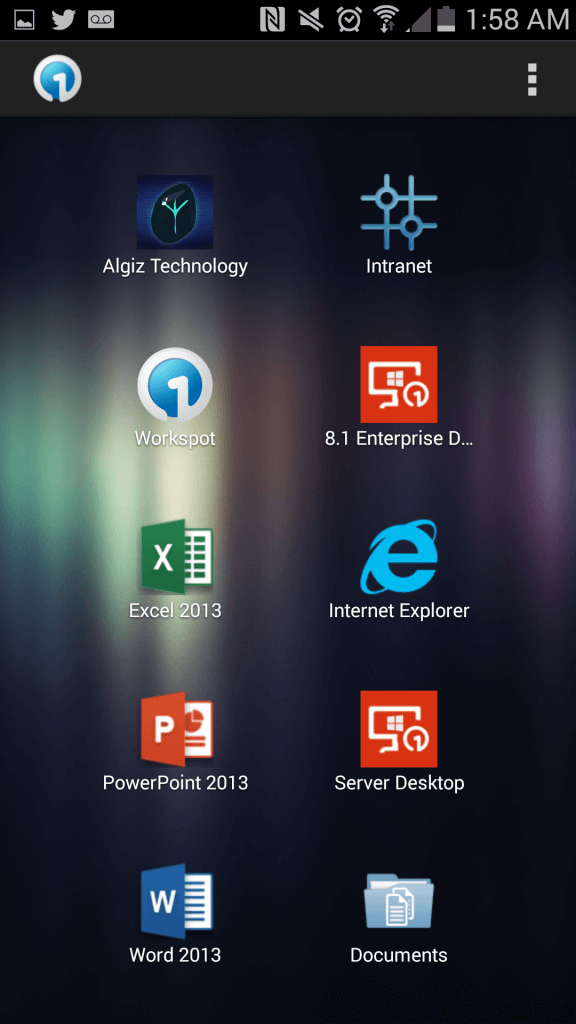 Running on an Android Smartphone 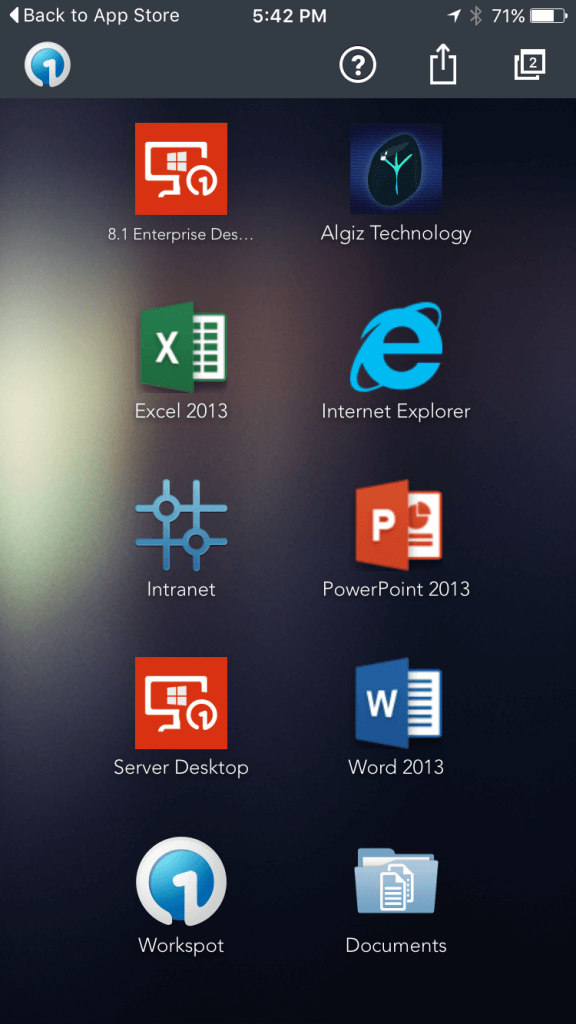 Running on an iPhone

Something which you may notice in the screenshots above is that the icon for the published desktops are a little different that’s because as I mentioned before, Workspot leverages RDP for connecting with the applications and desktops. Microsoft have released an RDP client for Android, OSX and iOS, thus the slight difference in those icons. But what’s cool about that is how seamless the experience is…as you can see the presentation of the console is the same on all devices. 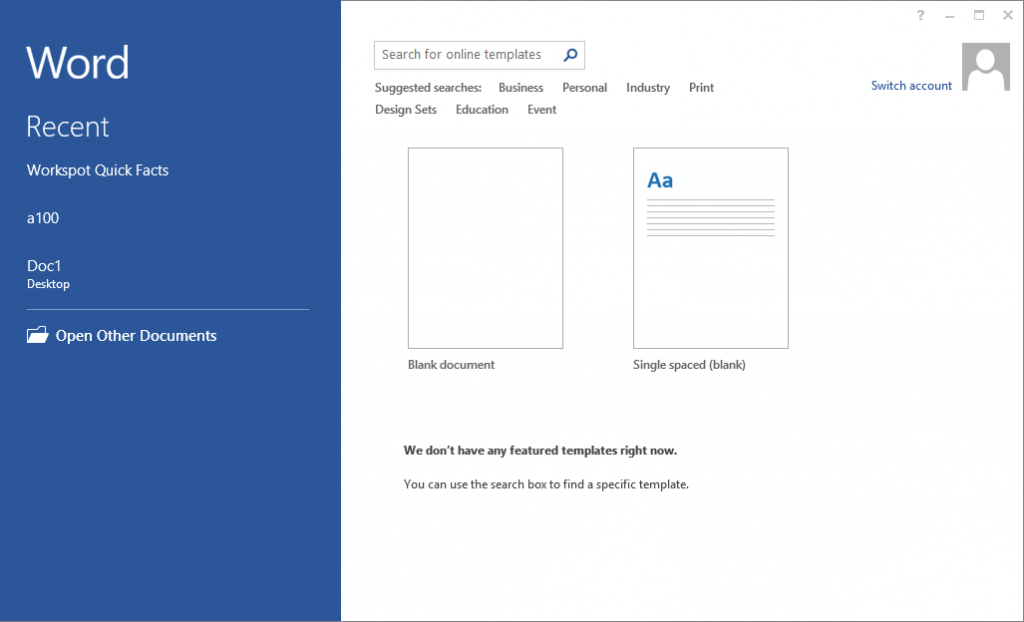 When I launch Word on my PC, it launches just like it would if it was installed locally. It presents as expected and how I would expect it to.

When I launch on an iPhone, Word launches leveraging the RDP client and appears correctly with the ability to use gestures and touch. 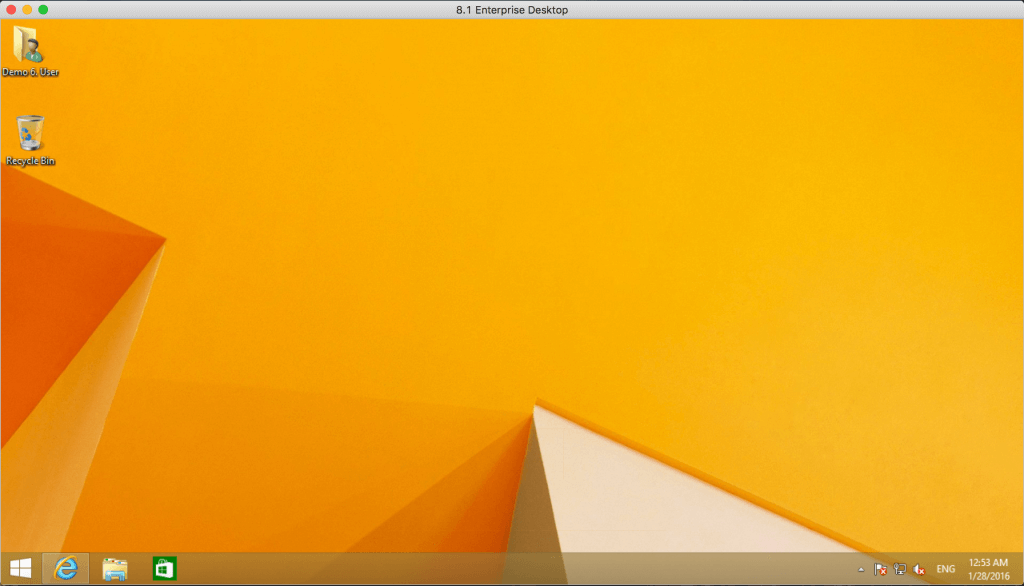 When launching one of the published desktops on my Macbook, it launches in an RDP session and is quick to launch and super responsive!

When launched from an iPhone it still launches quick and is responsive to a point. (More on this in my conclusion) 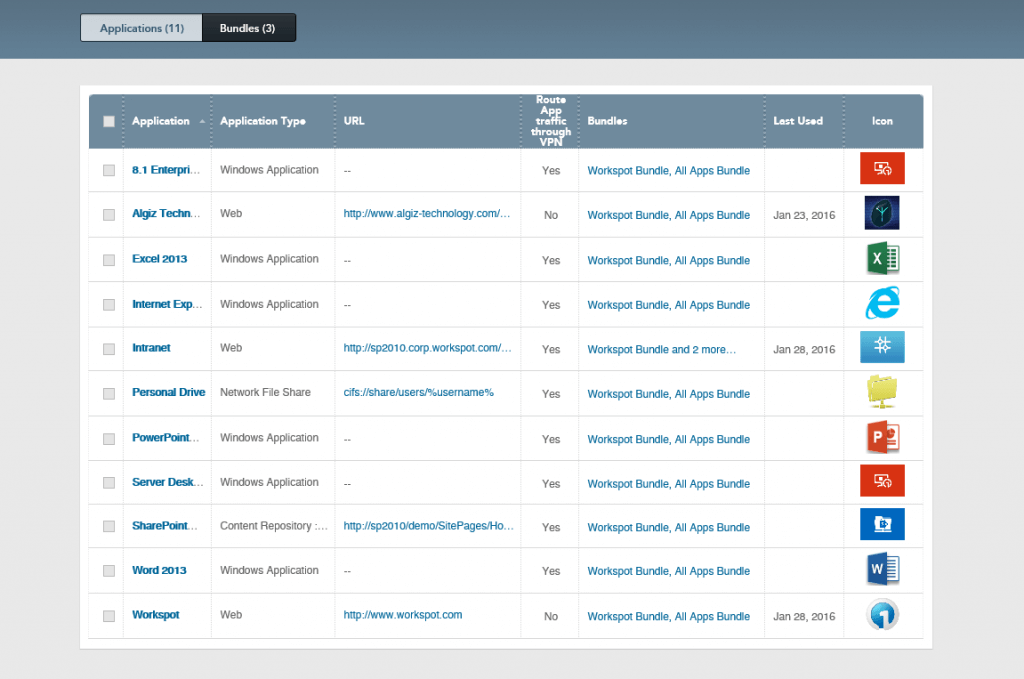 In the Admin console under applications, you can see there’s Windows applications and other types you can publish like file shares but check out the web feature. Workspot allows you to publish URL’s. When you launch one of these, the site is opened in a Workspot browser.

This browser is pretty stripped down, which is perfect for enterprise. You can restrict your users to only the sites  you publish to them. In essence, this is a site specific browser, which is something you can also find with Turbo.net and the new Citrix browsers. 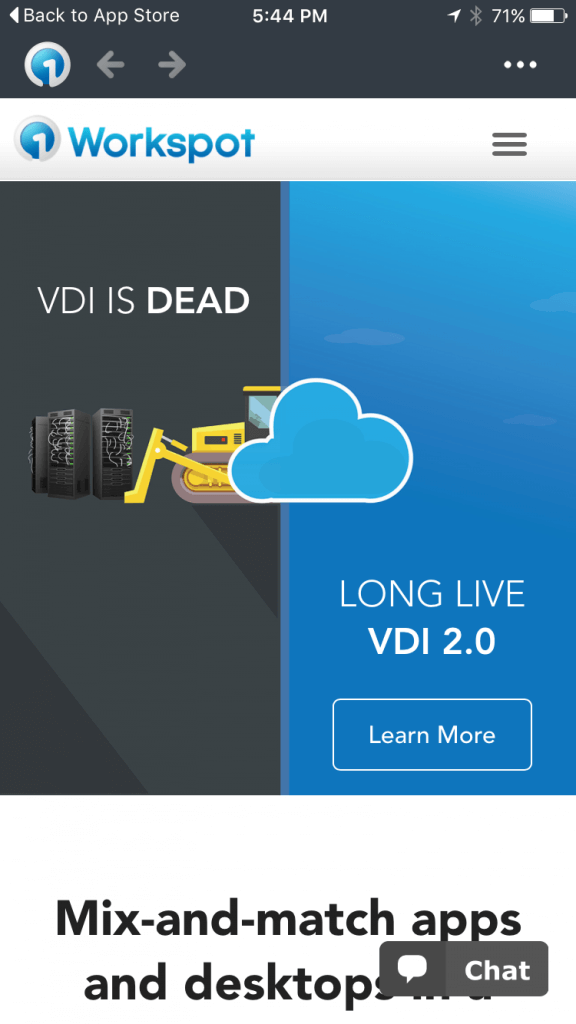 Workspot also have a mobile friendly version of the browser! Pretty cool!!! Again, ensuring a consistent, seamless experience across any platform. All handled by the cloud hosted Workspot services.

I hope I accurately depicted the flexibility of WorkSpot to suit your VDI infrastructure. Whether you are hyperconverged or not, Workspot offers a lot of advantages. Workspot is web scale, so it provides elasticity for you to scale as you wish. The setup is minimal, you don’t require any web services installed in your own domain, you simply install a connector which allows Worksport’s services to interact and help manage your on-premises environment. In fact, the management pane render management consoles like Citrix Studio somewhat redundant as you can just publish the applications and desktops through the options within WorkSpot. It’s also secure, they have been labelled as enterprise ready by SkyHigh Networks.

There’s a few shortcomings in my opinion.

While I think it’s really cool that the RDP session presents accordingly on each platform when you launch an application or desktop. You obviously still deal with the frustrations of trying to use a windows applications that’s not optimized for touch enabled devices on a touch enabled device like a phone or tablet.

Maybe my experience would have been better if I could have tested a ‘modern’ windows app that is optimized for touch and tried that instead. In fairness to the team at Workspot, this is not an issue with their product but rather a common complaint of mine when using a Windows application on a touch enabled device using XenApp or RDS.

Workspot leverages RDP. The desktop sessions from my PC were very responsive and while RDP has improved drastically in recent years as a protocol, it wouldn’t be my favorite of the bunch.

While Workspot greatly simplifies your VDI infrastructure, you’ll still have to deal with your own applications. If you need help with that, give me a call!

I really like the concept. Using Workspot on top of your servers, storage, network and virtualization platform is great, using on top of a hyper-converged platform is pay dirt!

If you haven’t started your VDI project yet, this is ideal, you don’t have to worry so much about planning out the broker and load balancing to scale for your environment, which can be tricky and one of the more difficult parts to scale later on. If you go hyper-converged, any time you want more capacity just plug in another box. If you already have a VDI environment, there’s still many benefits to running these services hosted in the cloud.

What I like most is the simplicity…it’s all very simple and I believe if VDI can be made simple then it really could become the multi-billion dollar industry ‘experts’ claimed it would be 4 years ago.

Converting Applications from App-V 4.x to 5.1